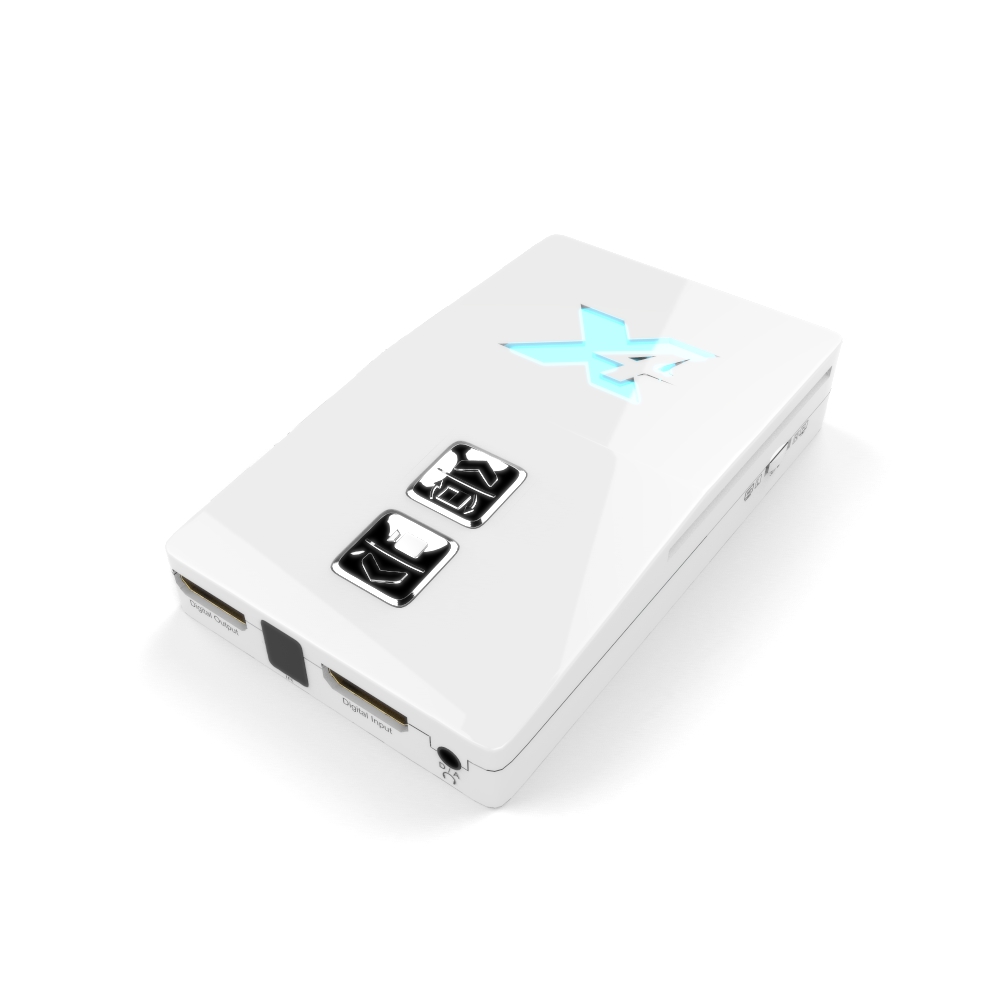 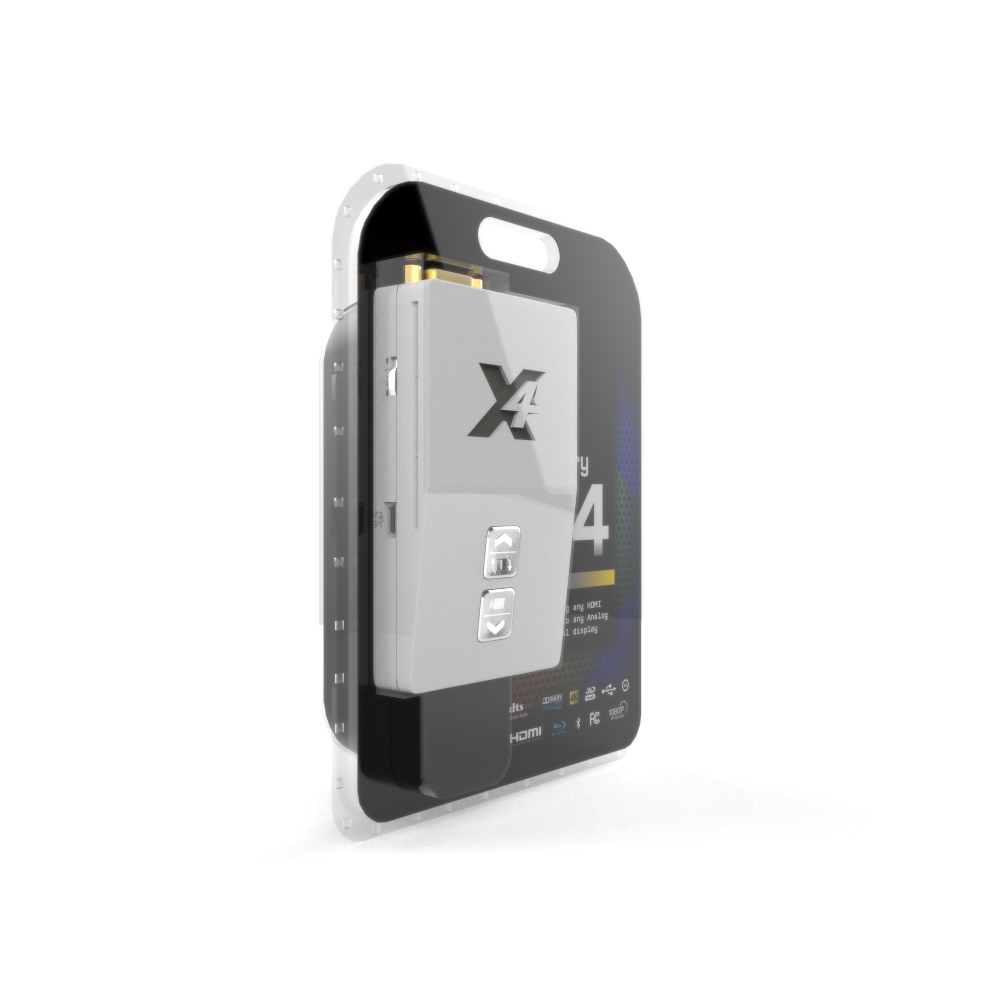 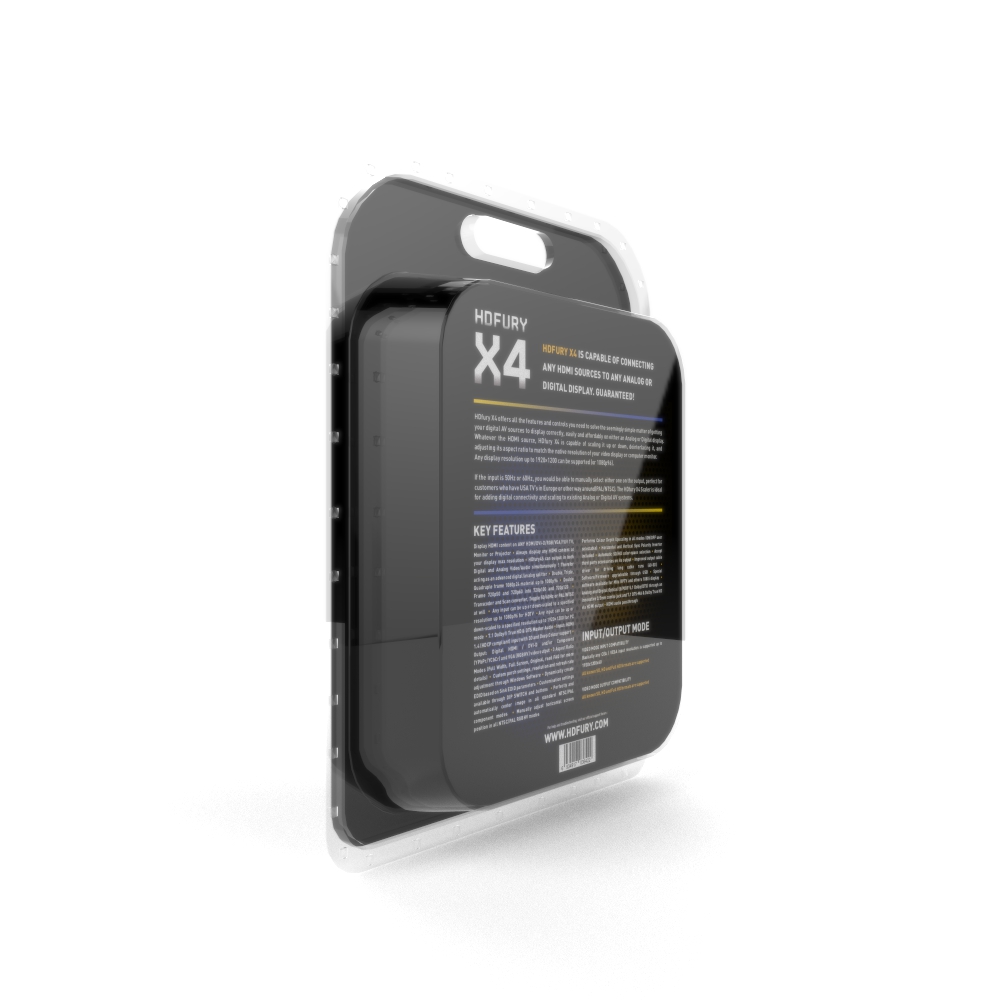 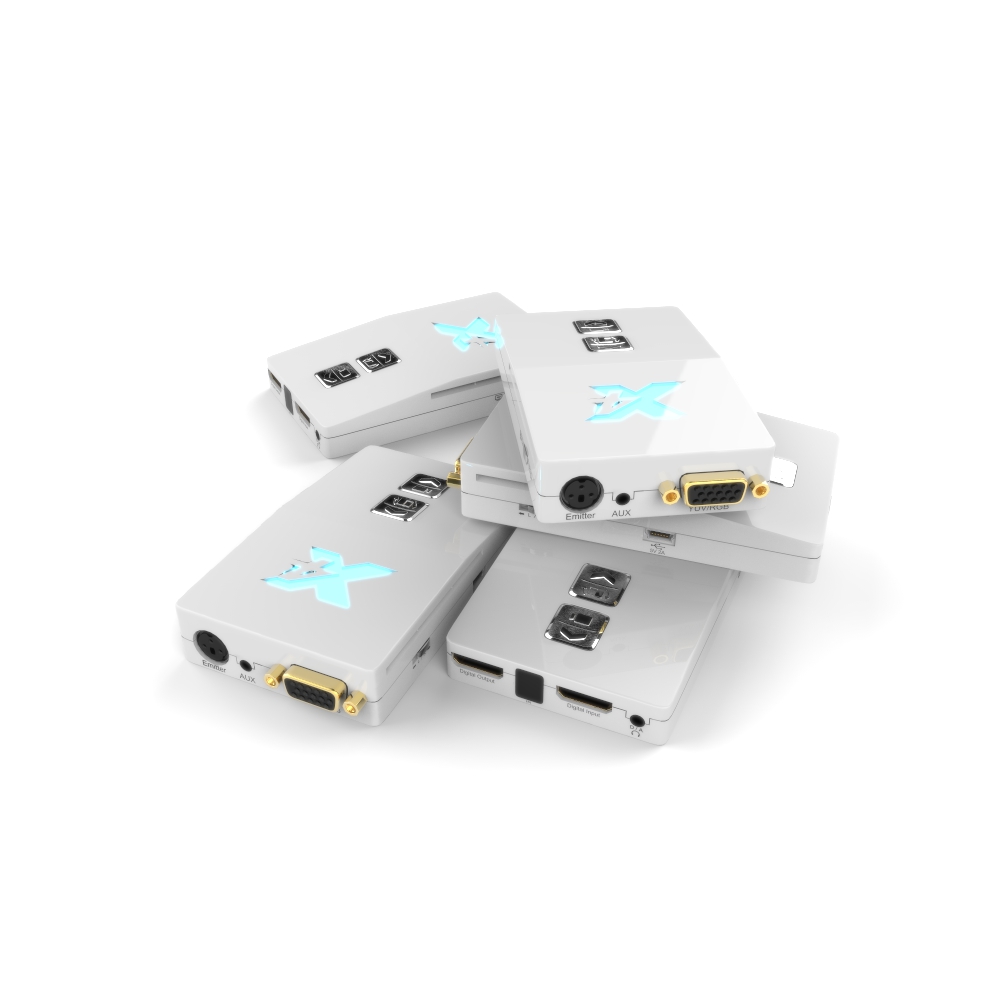 Unit ships with Scaler Firmware as default. The HDfury X4 is an updated version of the HDfury4 initially released as 3Dfury in 2012.
It has been updated in 2015 with the release of the Scaler Firmware, thus allowing any HDMI signal to be displayed on any Digital or Analog display.
Please refer to the Scaler FW tab and 3Dfury FW tab for more details.
Today in 2018, HDfury X4 is getting a new update, now allowing it to be connected to a 1080p HDR source or Vertex/Linker output for conversion of downscaled 1080p HDR to 1080p SDR.
Owners of any HDfury X4 (either HDfury4, HDfury4S or 3Dfury) can flash any firmware (HDR to SDR, Scaler or 3D Conversion) at anytime.


New in 2018: HDR to SDR conversion and ambient light solution

HDfury X4 is now capable of converting 1080p HDR to 1080p SDR for perfect streaming while gaming in 4K HDR, for ambient light solution or for capture and display needs.

The difficulty with this HDR to SDR conversion actually does not lie in the algorithmic mapping of HDR PQ signal into the SDR domain but the fact that the result video even when converted with just PQ conversion does not look the same on TV.
Its clear that when a HDR tv goes into HDR mode, it activates processing that is not uniform across different TVs. the image appears somewhat different between HDR TVs based on our experiments.
Therefore, said from another point of view, what you see on HDR TV – when converted back to SDR – does not appear similar on different 1080p screens because the HDR image already was different.
Also, different HDR sources are mastered for different target nits. Some for 1100 / 1400 or 4000 or 10000 nits. Regular SDR is 300nits. So converting and scaling from a moving target into 300nits is another issue. Sometimes image is darker and sometimes lighter.
All these taken into account the product needs a robust color processing in addition to PQ conversion. We have done just that and thats why the delay to do it. Here is the first iteration of all the color algos + PQ conversion done and to us they look good already.

All images are from PS4 4k60 422 12b 600MHz HDR. We are looking at the menus when pausing a game to keep the system in HDR.
The first image is on LG HDR TV. its the reference: 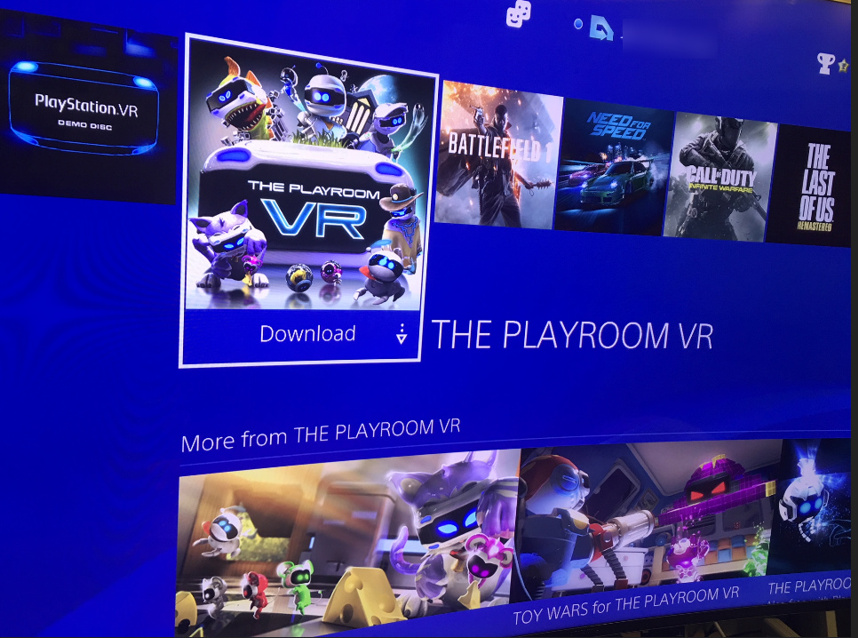 The second image is now a Vertex downscaled to 1080p60 444 12 bit HDR shown without any processing on a regular TV. This is how all TVs will show a HDR image. You see its all washed-out and suboptimal.
No amount of TV brightness/contrast/tone/etc control will bring this image any better. HDR on a SDR TV just looks bad because it looses all nits between 300 and the target..(1400/10000) 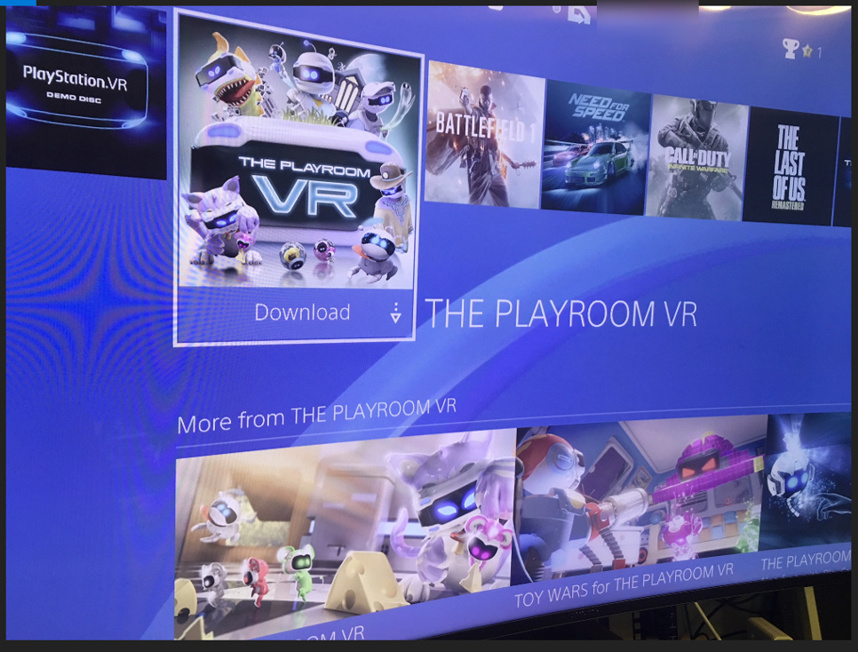 This last image is the same 1080p signal but now processed through our new algos on X4: 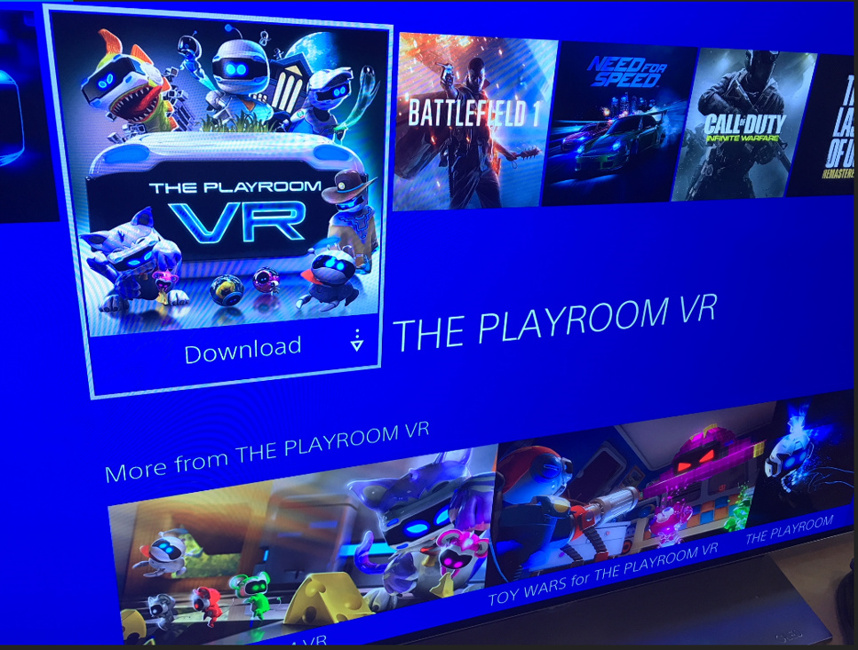 While converting HDR to SDR is already a needed feature for ambient light solution to operate correctly when playing HDR content, we went further and added a led driver directly on the X4 thru the existing 3D emitter output. Stay tuned, work in progress. 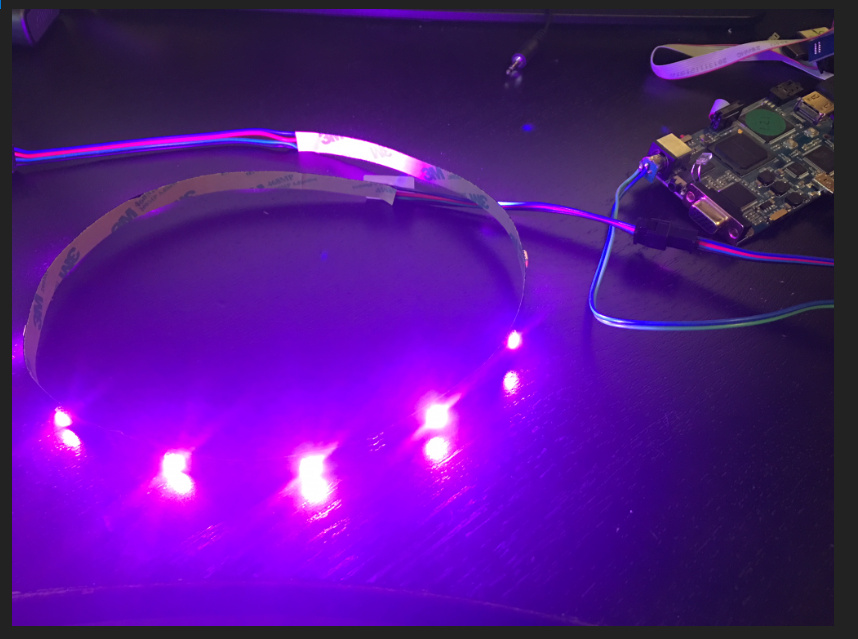 
HDfury X4 is capable of connecting any HDMI sources to any Analog or Digital display. GUARANTEED!
HDfury X4 offers all the features and controls you need to solve the seemingly simple matter of getting your digital AV sources to display correctly, easily and affordably on either an Analog or Digital display.
Whatever the HDMI source, HDfury X4 is capable of scaling it up or down, deinterlacing it, and adjusting its aspect ratio to match the native resolution of your video display or computer monitor. Any display resolution up to 1920×1200 can be supported (or 1080p72).
If the input is 50Hz or 60Hz, you would be able to manually select either one on the output, perfect for customers who have USA TV’s in Europe or other way around(PAL/NTSC)
The HDfury X4 Scaler is ideal for adding digital connectivity and scaling to existing Analog or Digital AV systems.

Basically any CEA / VESA input resolution is supported up to 1920x1200x60
All known SD, HD and Full HD formats are supported including:

All known SD, HD and Full HD formats are supported including:

All following PC graphics mode are supported in either 50 or 60Hz:


Getting Started with HDfury X4

No HDMI? No standard HD resolution on your display? No Problem!

Play HDMI movies, games, satellite/cable, and internet videos on any TV/HDTV/Projector or Monitor!

HDfury X4 allows you to view HDMI content from your PS4, X1, PS3, X360, Blu-ray player, satellite/cable or internet on all standard 50/60Hz or 100/120Hz displays with either Digital or Analog inputs or both at the same time!

If your TV, monitor or projector cannot play HDMI content because it lacks of a HDMI input, HDfury X4 can help you to achieve upscale/downscale, scanconvert, transcode and conversion to match any HDMI/DVI-D/YUV(component) or RGBHV(VGA) display’s native resolution!

If your TV, monitor or projector can play regular HDMI games and Blu-ray movies then the HDfury X4 can still help you to achieve upscale/downscale to match your display native resolution!

Upgrade to Perfect HDMI at your display native resolution for a fraction of the cost of buying a new display!

The HDfury X4 supports every HDMI signal type in existence today from SD to Full HD and beyond (up to 1080p72). It is firmware upgradable so that new features can be added in the future as needed!

In addition to supporting all standard displays in either analog or digital (HDMI, DVI-D, RGBHV, component), the HDfury X4 also offer dedicated and convenient firmware to 1080i sets like the fantastic 1080i Mits RPTV or the Pioneer Kuros and PDP line of Plasma.

How difficult is it to set up?

A few dip switchs on the HDfury X4 must be set once depending on whether your TV is a 50/60Hz or 100/120Hz model or if it takes Digital DVI-D/HDMI or either RGBHV or component as input. No other setup is required.
For more information download the User Manual from the Download Tab above.

HDfury X4 is 100% plug-n-play with existing convenience scaling for 1080i max display (others doable on request)
Just connect the HDfury X4 between the source and the TV/projector. That’s it!

Which projectors and TVs are supported?

Any standard 50/60Hz or 100/120Hz displays will work with HDfury X4.
HDfury X4 is the world first solution that work with any Digital (DVI-D/HDMI) or Analog (RGBHV/component) displays, no matter if they are 60hz only and you live in a 50hz area or if they don’t support any standard HD resolution like 1920×1080 or 1280×720. Thanx to the embedded scaler and unique aspect ratio modes, you will be able to display HDMI sources at the best of your display’s capabilities ALWAYS & GUARANTEED!

Got questions ? We have answers !

My display is not 16:9, how doe the aspect ratio modes work ?

99% of the time any scaler or TV simply stretches the picture to fill the screen or then leaves black bars on left/rigth because it assumes fixed 4/3 aspect ratio on a 16/9 screen. Instead the furyscaler will actually retains 100% the exact correct input aspect ratio and “drops” it on the final output frame size while scaling the maximum side. Therefore it automatically leaves black bars on top/bottom or sides as dependent on the incoming resolution.

I have a PC mode on my TV (or a PC monitor) what resolutions are supported for graphics mode ?

What output resolution does the HDfury X4 support in HDTV mode ?

My HD display is from Europe/UK/Australia where we use a 50Hz refresh rate. Will it work?

Yes, as all HD displays that support 50Hz also support 60Hz. Additionally HDfury4S is capable of toggling 50/60hz for PAL/NTSC in both HDTV and graphics modes at will.

My HD display only accept 60Hz material and in Europe/UK/Australia, we use a 50Hz refresh rate. Will it work?

Yes, through a simple dip switch setting, you can force the output to be always 50Hz if needed.

It does not matter. HDfury4S works with any version of HDMI from 1.0 and up.

Do I need to set anything special in my HDMI source device to set resolution correctly?

No. The HDfury X4 will be detected as 1080p capable by your source and always accept and process the highest quality stream from your source devices. There is no need to set the HDMI source to any specific resolution, the HDfury X4 will take care of it and scale up or down if needed.

Is there any latency (delay) introduced to the signal?

Less than one frame of latency per second is added to the signal which is not at all noticeable in games.

What is the USB port for?

To supply power from any USB port available if required (such as a PS4 USB port) and for firmware upgrades when new (additional) functions and enhancements are offered.

What about long HDMI cable runs? Can I expect issues?

HDfury X4 acts as an HDMI repeater device. So having a HDfury X4 in the path will amplify and recover the signal. You should not need any passive (or active) HDMI amplifiers, especially if you put HDfury X4 in the middle of your cable run. If you previously had to use an amplifier, the HDfury X4 can most likely take its place. The HDfury X4 has been used with 50 foot (and longer) HDMI cables without issues.

How are the new lossless audio formats via HDMI input handled ? E.g. DTS-HD/MA and DD/E-AC3 : Are they stripped down to DTS core or Dolby Digital respectively to fit the requirements of the S/PDIF standard ?

Lossless audio is transmit through HDMI output only. HDfury X4 does not compress or otherwise create loss to the incoming audio. Only stereo and 5.1 sound can be output via SPDIF output and analog output.

Unit ships with Scaler Firmware as default. 3D Conversion FW is designed for CRT/DLP/PLASMA/LED/.. @ 50/60 or 100/120Hz and above.
The 3Dfury is essentially a HDfury X4 platform running the 3D Conversion Firmware.
The HDfury X4 platform is also capable of running the Scaler firmware or the HDR to SDR conversion firmware.
Owner of any HDfury X4 (either HDfury4, HDfury4S or 3Dfury) can flash any firmware (HDR to SDR, Scaler or 3Dfury) at anytime.

Using 3D Conversion FW for LCD@50/60Hz is not supported due to inherent ghosting&cross-talk of LCD.

Two separate Internal EDID EEPROM with complete CEA861 extension block, Dip-switch selectable
■ One EDID supports all formats
■ The other EDID is up to 1080i, and no 24Hz support (by default, reprogrammable)

Automatically switches color-spaces for both HDTV and SDTV

Precise black levels – no black crush in any standard mode

Select the right drivers based on your Windows version and the USB port version you plan to use. Drivers only need to be installed once for all our devices.
Please note that if you connect your HDfury device to a WIN10 computer prior to any driver installation, WIN10 will install driver from the internet automatically, in such case you do not need to install any drivers manually and you can just proceed with using utility and updaters software from driver 3.9.2 directory. Each below downloads, once downloaded and extracted will provide utility and updaters for either 3.9.2 or 4.0.0 driver.